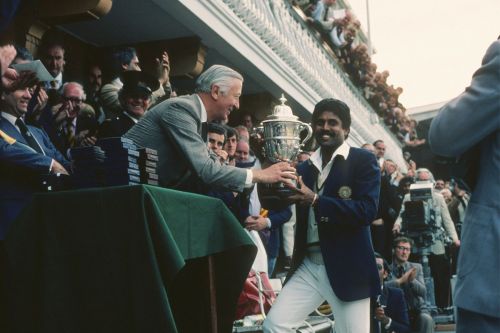 The 1983 World Cup final resembled a battle between David and Goliath. On one side, there were the strong two-time Champions – West Indies. They were packed with incredible batsman like Gordon Greenidge, Desmond Haynes, Vivian Richards, Clive Lloyd. And a deadly pace bowling unit comprising of Malcolm Marshall, Sir Andy Roberts, Joel Garner, and Michael Holding. Then again on the other side was the young, excited Indian squad led by Kapil Dev. This team was still adjusting to the ODI format (which at the time used to be a 60-overs format).

At the point when West Indies bowled out the Indian squad for mere 183, it appeared that the history will see West Indies attaining a hat-trick of World Cup title wins.

However fate had different plans

Greenridge was the first to go initially, getting washed up by fast bowler Balwinder Sandhu for only 1. Yet at the same time, it was far to go into the match. And the balance was still inclined in support of Windies. Desmond Haynes and Vivian Richards at that point tumbled to Madan Lal one after another. And India figured out how to find a way back to the game.

At the point when Lloyd was dismissed by Roger Binny, and Windies went five wickets down for just 66, there was a genuine glimmer of hope that India could cause a major bombshell. The wickets continued tumbling down, and eventually, West Indies were packaged out for 140.

On June 25th, 1983, India beat the mighty West Indies by 43 runs to dominate the game and guarantee their first World Cup trophy.

“It was the turning point for Indian cricket and for Indians. At a time when cricket was dominated by West Indies, Australia, New Zealand, and others, a total underdog Indians became the world champions,” Kris Srikkanth said on Star Sports 1 Tamil show ‘Winning the Cup – 1983’. He was a part of the World Cup-winning team in 1983.

After 28 years in 2011, MS Dhoni’s India went on to lift the ODI World Cup for the second time beating Sri Lanka in Mumbai during the last match.