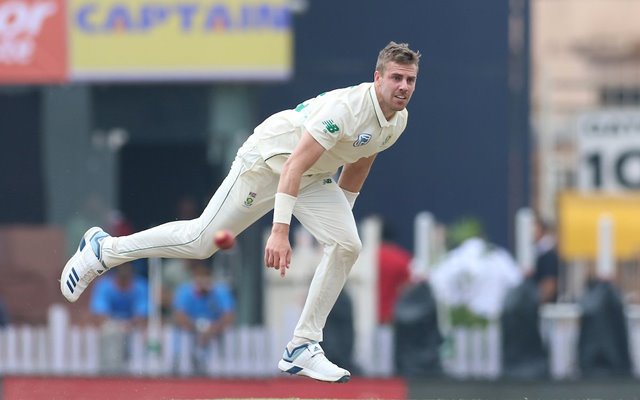 South Africa is dealt with a huge body blow as pacer Anrich Nortje is ruled out of the upcoming three-match Test series against India due to injury. Cricket South Africa (CSA) confirmed the development and revealed they won’t be announcing a replacement for Nortje. The speedster is an integral part of the bowling lineup for the team.

Along with Kagiso Rabada, Nortje has been effective for the team in all the formats of the game. Initially, Nortje managed to do well in the white-ball formats but later he also solidified his place in the Test team. Overall, the 28-year-old has played 12 Test matches and has picked 47 wickets at an average of 28.11. His ability to bowl at an express pace with good control would have been helpful for South Africa on the bouncy tracks in Centurion and Wanderers.

Proteas speedster Anrich Nortje has been ruled out of the Test series against India.

However, the team has to  lookout for other possible options in place of Nortje. The hosts have plenty of options in the form of Lungi Ngidi, Duanne Olivier, and Marco Jansen along with Rabada to choose from. Olivier was touted to as the next big thing in South African cricket before he signed a Kolpak deal in 2019. However, the pacer is back and would be hoping to continue his good form for his team. The right-arm pacer has played 10 Test matches and has picked 48 wickets at an average of 19.25.

Ngidi has been with the team for past three years. He has formed a good combination with Rabada and Nortje. The first Test match between South Africa and India will be played at Centurion on December 26. The hosts have never lost a home Test series to their rival since their readmission to cricket in 1991. The Test series will also be South Africa’s first in the new World Test Championship (WTC) Cycle.