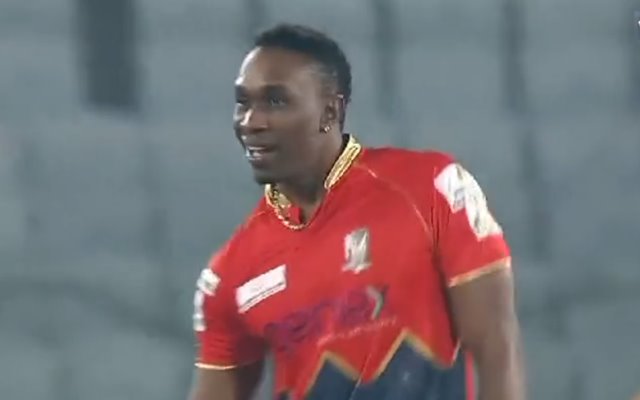 Dwayne Bravo is one of the cricketers who follows all the trends on social media. In the ongoing Bangladesh Premier League, Bravo is a part of the Fortune Barishal. In the eighth game of the tournament between Comilla Victorians and Barishal, Bravo followed another trend.

Bravo bowled the 18th over of the match and took two wickets on two consecutive balls. On the fifth ball of the over, Bravo dismissed Mahidul Islam Ankon and celebrated by doing the viral Srivalli dance from the movie Pushpa.

Ankon tried to pull the short ball bowled by Bravo and Najmul Hasan Shanto picked an easy catch at deep mid-wicket. Bravo dismissed Nahidul Islam for a duck on the last ball of the 18th over. Islam also faced a short ball and tried to play the pull shot which went straight to Towhid Hridoy standing at deep mid-on.

The Victorians made 158 runs for the loss of seven wickets in 20 overs. Bravo picked three wickets in four overs while giving away 30 runs. Bravo also dismissed the Victorians captain Imrul Kayes for 15 runs off 11 deliveries. Mahmudul Hasan Joy made 48 runs off 35 balls and was the highest scorer for the Victorians.

Here’s the video of Dwayne Bravo doing the srivalli step: