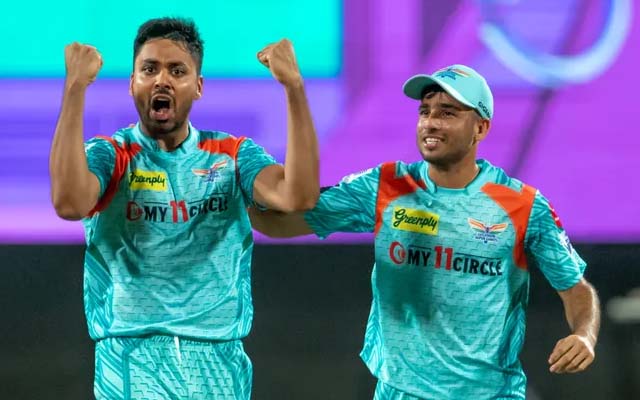 Lucknow won the 53rd match of the Indian T20 League 2022 by 75 runs and thus, convincingly beat Kolkata. Owing to an outstanding bowling performance, the KL Rahul-led side won the game rather comfortably. Kolkata, on the other hand, lacked confidence while chasing a target of 177 runs. The men in turquoise moved to the top of the table with the win.

Kolkata won the toss and decided to bowl first at the MCA Stadium. Batting first, Lucknow lost their skipper KL Rahul, before he could face a ball. He was involved in an unfortunate run out. Quinton de Kock and Deepak Hooda scored some quick runs to get their side to a good position in the match. They added 71 runs in just 39 balls. De Kock was dismissed immediately after scoring his half-century in the eighth over.

Hooda and Krunal Pandya then added a 34-run partnership. However, a string of wickets put the KL Rahul-led side in a difficult position. Russell took the wickets of Hooda (41) and Pandya (25) in successive overs. After which, 30 runs in the 19th over of Shivam Mavi by Marcus Stoinis (28) and Jason Holder (13) helped the men in turquoise get 176 runs in the first innings.

Defending the total, Lucknow had the perfect start. They got early wickets in quick succession that put them in the driver's seat. Baba Indrajith (0), Shreyas Iyer (6), and Aaron Finch (14) all fell within the powerplay. The men in purple scored just 25 runs in the first six overs, and lost three wickets in the process. Following that, only Andre Russell was able to score runs, as the rest of the batters struggled.

Russell muscled a few big hits into the stands, but fell to Avesh Khan in the 13th over. He scored 45 runs in 19 balls, which included three fours and five sixes. Post that, wickets kept falling for Kolkata. Thus, Lucknow bundled the Iyer-led side in the 15th over. Jason Holder and Avesh Khan took three wickets each. As a result, the Lucknow-based franchise won their eighth win of this season.

Before some days, people trolled him for his Captaincy. And now his team is in the first position in points table! Well Captained KL Rahul!💙@klrahul | #LSGvsKKR pic.twitter.com/jGEitsxi63

WHAT A VICTORY! And on top of the table we go 🥰
Thanks for your super cheers, #SuperFam! 🤩#AbApniBaariHai #IPL2022 #LSGvsKKR