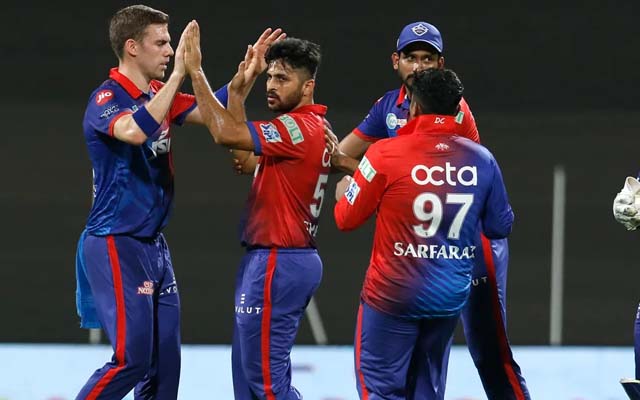 Delhi strengthened its chances of reaching the playoffs after beating Punjab by 17 runs on Monday at Dr. DY Patil Sports Academy in Mumbai. Delhi registered their 7th win and now have 14 points to their name.

Batting first, Rishabh Pant and Co. managed to score 159 runs in the first innings. Delhi were struck with an early blow as David Warner got out on the very first ball of the innings. However, Sarfaraz Khan wreaked havoc with the bat, on the other hand.

He tried to hit every ball for a boundary and also found success on most occasions. Thanks to his sensational ball-striking, Delhi had reached 59 runs at the end of the power play. Though, Sarfaraz Khan also got out in the process after scoring 32 runs in 16 balls.

However, Delhi lost Pant (7) and Powell (2) early to leave the team in trouble at 112 for 5. However, Mitchell Marsh kept scoring boundaries at the other end and negated the fear of Delhi crumbling to a low score. He ended up scoring a match-turning knock of 63 runs in 48 balls, including 4 fours and 3 sixes. His knock helped them reach a par score on a slow wicket.

In pursuit of the score, Jonny Bairstow, once again, gave the team a solid start in the power play. His fierce striking meant Punjab had reached 27 runs in just 3 overs. However, Anrich Norjte, eventually, had him as the Englishman mistimed the pull only to be caught at deep backward square. He scored 28 runs in 15 balls but failed to convert that into a big score this time around.

Punjab kept losing wickets, thereafter. Rajapaksa hit one four before getting out caught at mid-wicket off Thakur. On the last ball of the same over, Thakur also sent Shikhar Dhawan (19 off 16) back to the hut. Two wickets in just three balls meant Punjab were in deep trouble at 54 for 3 at the end of the powerplay.

Mayank Agarwal’s batting woes continued as Axar Patel cleaned him up in the 7th over and Kuldeep Yadav had Livingstone (3 off 5) stumped in the very next over. From 53 for 3, Punjab further slipped to 61 for 5 after 8 overs. The likes of Harpreet Brar and Rishi Dhawan too failed to hit the straps and Punjab lost all hopes as they were reeling at 82 for 7.

However, Rahul Chahar and Jitesh Sharma reignited some hope, thereafter, as the duo stitched 41-run partnership for the 8th wicket. However, Shardul Thakur, once again came to the rescue as he had Jitesh Sharma (44 off 34) in the 18th over to end all hopes for Punjab. In the end, Punjab were were restricted to 142 runs. Shardul Thakur starred with the ball as he returned with impressive bowling figures of 4 for 36 in 4 overs.

Here’s a look at some of the top reactions from the game:

Jitesh will win this for @PunjabKingsIPL Life changing knock is coming from him! #PBKSvDC

Punjab Kings whole team has only 1 gear. They don’t care about the fucking situation of the match. Dumbest franchise to ever play the IPL. It was 8 years ago they made it to IPL playoffs.#IPL2022 #DCvsPBKS

Everyone :Punjab will make it to the playoffs this time

We talk about Virat , Kohli but Mayank Has done nothing this season .#mayank #DCvsPBKS