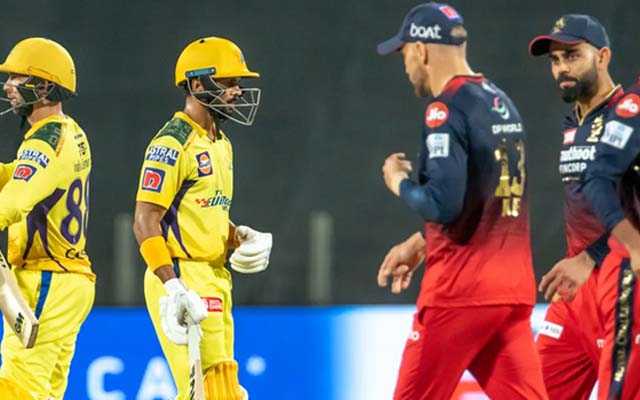 Bangalore beat Chennai by 13 runs in the 49th match of the Indian T20 League 2022. A brilliant bowling effort from the men in red got them a win after a series of losses. Glenn Maxwell got them the early breakthroughs, and the efforts of Harshal Patel and Josh Hazlewood in the latter stage sealed the deal for the Bangalore team.

Winning the toss, Chennai decided to bowl first at the MCA Stadium in Pune. Batting first worked out well for the men in red as they had a solid opening partnership. Virat Kohli and Faf du Plessis added 62 runs in 7.2 overs on a surface that was not favourable to batting, to begin with. Moeen Ali ended the partnership when he dismissed Du Plessis (38). After two more quick wickets, Mahipal Lomror (42) and Anuj Rawat (21) had a partnership of 44 runs, which proved to be very important.

After the two departed for a team score of 155 for five in 18.1 overs, Dinesh Karthik was in the middle. He played a perfect cameo of 26 runs to help Bangalore reach 173/8 in the first innings. Maheesh Theekshana and Moeen Ali were the stars with the ball as they took three and two wickets respectively. Chasing the target, Ruturaj Gaikwad and Devon Conway continued their form from the last game.

The duo played an attacking game right at the start and added 54 runs for the first-wicket partnership. Despite a strong start, Chennai lost three wickets in a row in the middle overs. Within 10 overs, they had lost the wickets of Gaikwad (28), Robin Uthappa (one), and Ambati Rayudu (ten). In 9.4 overs, Chennai was reduced to 75/3. Devon Conway along with Moeen Ali built an important partnership of 34 runs before Conway (56) then lost his wicket to Wanindu Hasaranga. At 109-3 in 14th over, things looked good for Chennai but Conway's wicket triggered a collapse.

Faf's decision to hold Harshal Patel for the final overs paid dividends and he didn't allow Chennai batters any breathing space. Bangalore eventually won the game by 13 runs, with Patel bagging Man of the Match for his 3-35.

MI welcoming CSK out of the Play Offs Race pic.twitter.com/ZHI0X8V71i

This could be US but you don't reply to my texts pic.twitter.com/ZKJOdV4KFI

"Marry a boy who supports RCB", and she took it seriously. pic.twitter.com/GCyNeai9D2

CSK taking MI out off the play off along with it #CSKvRCB pic.twitter.com/lZluPvcfvI