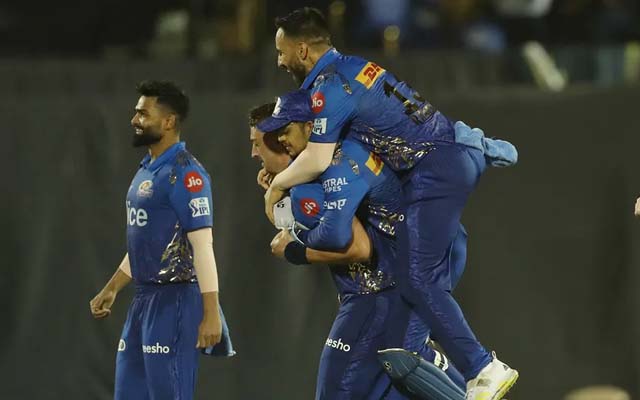 Mumbai beat Gujarat by a margin of five runs in the 51st match of the Indian T20 League 2022 to make it two wins in a row. Gujarat had a near-perfect game as they did all the most  things right. Chasing the target of 178, a flying start by the openers set the perfect foundation for Gujarat. However, in the end, Daniel Sams bowled a faultless final over for Mumbai to secure the victory.

Hardik Pandya went with the obvious choice to bowl first after winning the toss. The Mumbai openers had a solid start as Rohit Sharma and Ishan Kishan registered the highest score for Mumbai in the powerplays this season, 63. However, they faced some turbulence in the middle overs as they lost three wickets in quick succession. Sharma (43), Suryakumar Yadav (13), and Ishan Kishan (45), departed for a team score of 111 in 12 overs.

In a smart captaincy move by Pandya, he held back Rashid Khan to bowl to Kieron Pollard (4), who was starting to build a partnership with Tilak Varma (21). Khan set him up with a couple of googlies before dismissing him with a leg-break. After two more wickets, Tim David struck some big runs at the end to help the men in blue and gold reach 177 runs. He scored 44 runs in 21 balls. In the chase, the batting-friendly wicket helped Wriddhiman Saha and Shubman Gill to get to the perfect start.

While Saha was scoring with freedom, Gill took his time to settle in. Once he got comfortable, he too played a brilliant game. The duo added 106 for the first-wicket partnership. Shortly after scoring their half-centuries, Gill (52) and Saha (55) fell to Murugan Ashwin in the 13th over. Mumbai needed 67 runs in eight overs. Hardik Pandya (24) and the in-form Sai Sudarshan (14) also got out in quick successions also were dismissed in quick session, leaving Mumbai at 156-4 in 17.4 overs, The equation came down to 20 runs in the final two overs.

Jasprit Bumrah conceded 11 runs in the 19th over, leaving 9 for Daniel Sams to defend. Daniel Sams bowled a magnificent final over against David Miller and Rahul Tewatia and helped Mumbai win by 5 runs.

1. MI in 39 overs of the match
2. MI in the last over today pic.twitter.com/rfN7IMsHCk

Pollard saw Tim David taking over his role so he took over Anukul Roy's role. pic.twitter.com/1EiCP4EVXS

How others How Saha
see Bumrah sees Bumrah pic.twitter.com/mrq2WFGkiQ