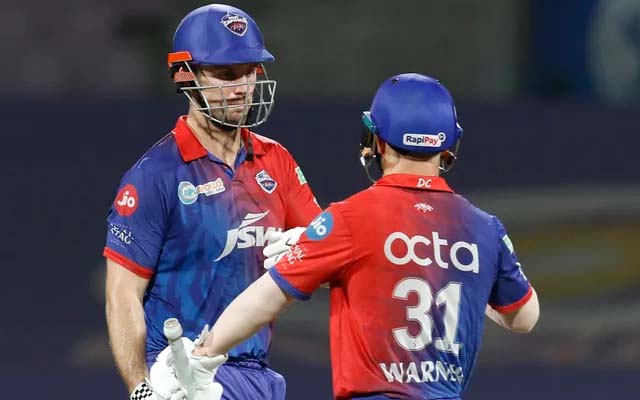 Delhi defeated Rajasthan by eight wickets in the 58th match of the Indian T20 League 2022. The likes of Mitchell Marsh and David Warner played an influential role in Delhi's triumph. With this victory, the 2020-finalists still stand a chance of making it to the playoffs.

Rajasthan were asked to bat first in the match at the DY Patil Stadium in Mumbai. After losing Jos Buttler (seven) early on, the men in pink and blue sent in Ravichandran Ashwin at number three. This unusual move worked out well for them as he played a superb knock. Partnering with Yashasvi Jaiswal, they ensured that Rajasthan score 43 runs in the powerplay. While Jaiswal (19) could not hold on for long, Ashwin started attacking the spinners on a track that had spin on offer.

He raced to his maiden half-century in the tournament in 37 balls. However, Mitchell Marsh got rid of him on the very next ball in the 15th over. Post that, Devdutt Padikkal, who gave Ashwin good support, continued scoring well. With a few wickets tumbling on one end, he tried to accelerate the innings. He scored 48 runs in 30 balls before being dismissed by Anrich Nortje in the 19th over, for a team total of 146. The Rajasthan-based franchise managed to score 160/6 in the first innings.

As for the second innings, Delhi also lost an early wicket. Nevertheless, the partnership of David Warner and Mitchell Marsh put the men in blue and red in a comfortable position. While Marsh was continuing to freely score runs, David Warner struggled to get going early on. The opener played a few false shots and was slightly tentative. However, he ultimately settled in the middle and started making the quick runs. Meanwhile, Marsh got to his half-century.

Yuzvendra Chahal ultimately broke the 144-run partnership with Delhi needing 17 runs in three overs. The leggie dismissed Marsh (89) and denied him of his maiden Indian T20 League hundred. In the end, Warner struck the winning runs in the 19th over to complete his half-century and help Delhi win the match.

Stumps and bails are fitted with this pic.twitter.com/DrErRxnVUH

RR: We have Orange Cap and Purple Cap