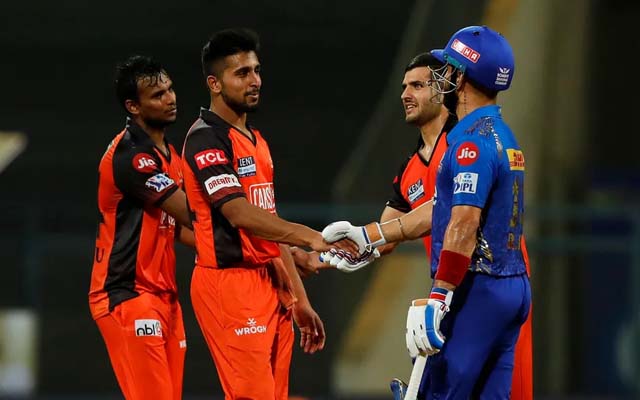 In the 65th match of the Indian T20 League 2022, Hyderabad defeated Mumbai by three runs in a last-over thriller. Despite a strong start from Mumbai and a late scare from Tim David, Hyderabad held on to their huge total of 193 runs. The victory ended Hyderabad’s losing run and kept their playoff chances alive.

Mumbai decided to bowl first at the Wankhede Stadium after winning the toss. Abhishek Sharma (nine) lost his wicket early on, but Hyderabad had a great start. Rahul Tripathi and Priyam Garg laid the perfect foundation for them. They helped the team get to a total of 57 in the powerplay. The two went on to put up an impressive performance, scoring 78 runs in the partnership. Ramandeep Singh got the breakthrough wicket in the tenth over by dismissing Garg (42) for a team score of 96.

The duo of Tripathi and Nicholas Pooran then continued to score quick runs. Tripathi (76), playing a great game, raced to his half-century. They added 76 runs in the partnership before Pooran (38) was dismissed in the 17th over for a team score of 172. However, a few wickets in quick succession, in the end, reduced their scoring rate. The Kane Williamson-led team managed 193/6, batting first.

Mumbai’s openers, Rohit Sharma and Ishan Kishan, got them off to a fast start in the chase. Sharma looked in great touch, but Kishan never looked settled. After scoring 51 runs in the powerplay, Mumbai slowed down a bit. They scored 95 runs in their partnership. Both quickly lost wickets while attempting to increase the run rate for a team total of 101 in 11.3 overs. Mumbai then lost three more wickets in the next 17 overs. At this moment, they were in big trouble.

Tim David (46), however, kept the hopes alive as he struck 26 runs in the 18th over. He was unfortunately run out on the last ball of the same over. Mumbai required 19 runs in the final two overs. Bhuvneshwar Kumar bowled a brilliant 19th over, not conceding any run and picking a wicket. Fazalhaq Farooqi remained calm to prevent Mumbai from chasing the target. In the last over, he gave up 15 runs.

Rohit Sharma fans after watching him getting out without milestone after being well settled on crease : pic.twitter.com/ddAduiNolc

Your next task is to score a 50. pic.twitter.com/llFM8I0EOT