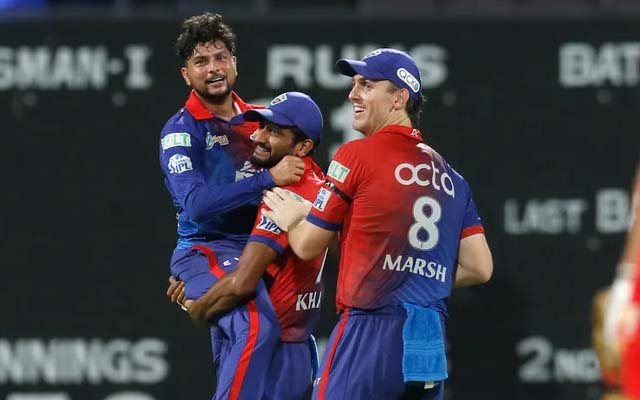 Delhi beat Punjab by 17 runs on Monday to secure their 7th win in the Indian T20 League 2022 and keep their hopes alive for playoffs. Rishabh Pant and Co. batted first on a slow pitch and managed to score 159 runs in the first innings. David Warner got out on the first ball of the match but Sarfaraz Khan made an aggressive start at the other end.

He scored a vital knock of 32 runs in 16 balls before getting out in the 5th over. However, his quick-fire knock meant Delhi reached 59 runs by the end of the power play. Wickets kept falling at regular intervals, thereafter, but, Mitchell Marsh held firm at one end.

The likes of Rishabh Pant and Rovman Powell failed to hit the straps but Marsh kept the scoreboard ticking. Despite lacking support from the other end, he managed to score a match-defining knock of 63 runs in 48 balls, and, thus helped the team reach a competitive score of 159 runs at the end of the first innings.

For Punjab, Livingstone starred with the ball as he picked three crucial wickets for just 27 runs in 4 overs. Arshdeep Singh went for some runs but also picked three wickets. In pursuit of the target, Bairstow started off strongly. He played some well-timed shots and Punjab had managed 27 runs in 3 overs.

However, Anrich Norjte had the big fish in the 4th over as Bairstow mistimed the pull straight to the man at deep mid-wicket. Shikhar Dhawan, once again, failed to play a big knock as Thakur had him caught behind in the 6th over. One ball prior to that, Thakur also accounted for the wicket of Rajapaksa as Punjab were reeling at 54 for 3 at the end of the powerplay.

They needed a partnership but didn’t get one. Axar Patel castled Mayank Agarwal (0 off 2) as the latter’s batting woes continued. The man-in-form, Liam Livingstone (3 off 5) was also out stumped early as Punjab slipped to 61 for 5. Soon, the equation fell to 82 for 7.

Rahul Chahar and Jitesh Sharma stitched a valuable 41-run partnership for the 8th wicket. However, once Jitesh Sharma got out in the 18th over, it was all but over for Punjab. In the end, Mayank Agarwal and Co. fell 17 runs short of the target.

Here’s a look at top 10 memes from the game:

Arshdeep Singh you dropped this 👉👑👈 pic.twitter.com/mlOzuyJ6Gv