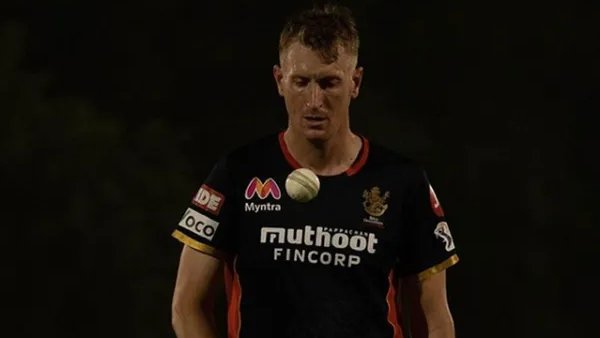 South African bowling all-rounder Chris Morris played the first match of IPL 2020 on Saturday. He gave a stellar performance for Royal Challengers Bangalore as the team convincingly defeated Chennai Super Kings. The Bangalore-based team spent INR 10 crores on him at the auction. It brought plenty of eyebrows to the team. Nonetheless, Chris Morris and his performance on Saturday proved that he is worth every penny spent on him. His teammate, AB De Villiers, has opened up on what makes him so exceptional.

On Saturday, before the match against Chennai Super Kings, RCB replaced Moeen Ali with Chris Morris. As the new-ball bowler, he took three wickets for them in four overs, conceding only 19 runs. The South African all-rounder also played his part as a fielder, became an instrument in a run-out, and took a catch.  As a result, RCB defeated MS Dhoni’s CSK by 37 runs. The 33-year old couldn’t participate in the first few games of the ongoing IPL due to an injury he has suffered. Morris had earlier played for many IPL franchises.

Royal Challengers Bangalore is currently at the 4th position in the IPL points table with 8 points. So far they have played 6 matches and won four of them in the ongoing IPL season.

AB De Villiers mentioned that Chris Morris is different from those pacers, who can hardly do anything other than just bowling. As per De Villiers, Morris is a skillful new-ball and death bowler. He has the capability of giving the opponents some lusty blows in the slog overs. He further added that Morris is exceptional in the field. The former South African skipper commented that Morris has the power to turn the game on its head. De Villiers is confident that after Chris Morris has started playing in the tournament; RCB is going to get balance in bowling and in scoring quick runs when needed.

“He is a special talent. The history of cricket suggests the typical fast bowler usually bowls fast but can’t do much else—can’t bat, can’t field and can’t play other sports. Chris is different. A fast bowler who restricts batsmen at the start and end of the innings, a hard-hitting batsman who scores quickly in the middle-order and an excellent fielder, he’s the kind of player who has the ability, with ball and bat, to change the course of the game,”.

“He has the ability to bring balance to our team for the remainder of the tournament—not only bowling in the power play and at the death but also scoring quick runs when required,”.