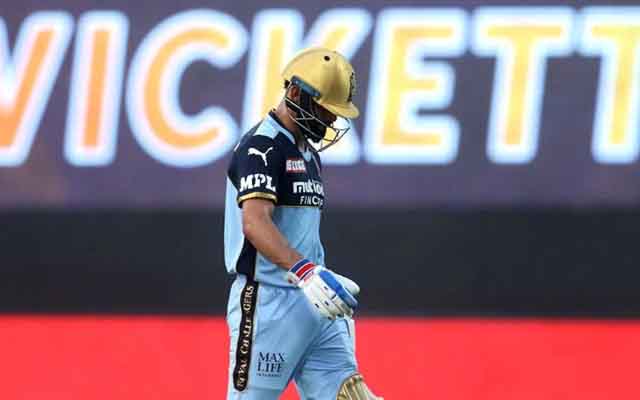 It was far from an ideal start for Royal Challengers Bangalore (RCB) in their resumption of the IPL as they lost to Kolkata Knight Riders (KKR) by a thumping margin of nine wickets. Their batting crumbled as they were shot out for just 92. Their big guns, skipper Virat Kohli (5) and AB de Villiers (0) failed to get going, and from there, the writing was on the wall.

A lot was expected of Virat Kohli given that he thrives in this format of the game. Kohli played a picture-perfect shot through covers but was trapped in front by Prasidh Krishna on the next ball.  Former West Indian great Brian Lara analyzed Kohli’s dismissal and highlighted a flaw.

"In the World Cup 2019 semi-final against New Zealand, LBW again – you look his head position. The ball before (vs KKR) he struck it through extra-cover – maybe the best shot of the match. The Head was on top of the ball. The next delivery, his head was almost in the same position as the previous ball, but the line was completely different – it was coming down from middle and off, angling into middle and leg,” Lara said.

“That is an issue we know that a lot of right-handed batsmen, get on the front foot and fall over. Just need to maybe wait a little bit longer, keep a stiller head, and have that balance so that you can go down the track, instead of going towards the off stump when the ball is angled towards leg,” he added.

Recently, Virat Kohli stepped down from his post as India and RCB skipper citing workload management and the need to focus more on his batting. The Indian skipper has been a shadow of his own in the last couple of years and has not scored a hundred. He has got few fifties but has failed to convert them into a three-figure mark, a trait Kohli is so well known for.