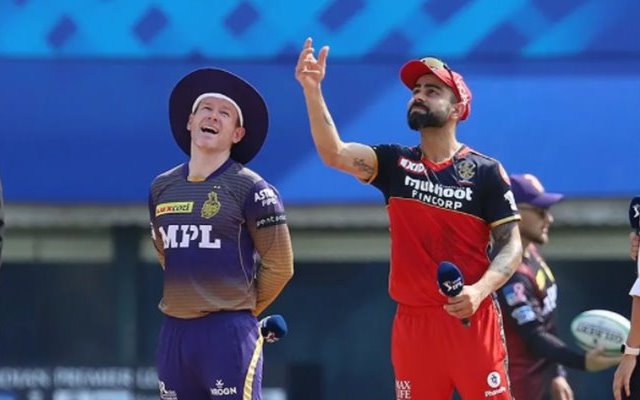 Kolkata Knight Riders(KKR) and Royal Challengers Bangalore (RCB) will resume their rivalry at the Sheikh Zayed Stadium on September 20th. Both teams had contrasting outings in the first leg. While RCB won five of their seven games, KKR could manage just two wins in seven matches.

The rescheduled IPL saw many teams alter their team combination owing to several stars pulling out of the second leg and both RCB and KKR are no different. For KKR, Pat Cummins won’t be available, which is a massive blow. Not only Cummins was their best bowler, but he was also the only batter with a strike rate of over 150 for KKR. Meanwhile, for RCB, the likes of Daniel Sams and Adam Zampa pulled out of the remainder of the season but they roped in Wanindu Hasaranga, Tim David and Dushmantha Chameera to make things even.

KKR’s batting struggled in the India leg and would certainly need to perform better if they want some favourable results. The good thing about KKR is that Andre Russell looked in destructive form in the CPL and KKR would want him to continue his good run in the IPL. In addition, Nitish Rana, Rahul Tripathi, and Dinesh Karthik, Eoin Morgan could be match-winners on their day. Sunil Narine, Varun Chakravarthy give them two good spin bowling options while Lockie Ferguson could be threatening with his extra pace.

Over the years, RCB have always been a batting heavy side but this time they have done well with the ball as well. Harshal Patel, Mohammad Siraj, and Yuzvendra Chahal are good wicket-taking options while their recent signing, Wanindu Hasaranga could be a serious threat for the oppositions given the conditions.

The surface in Sheikh Zayed Abu Dhabi is generally good for batting. With short boundaries on either side, it’s not an easy ground to defend. Of the 22 matches that have been played on this ground, 13 have been won by teams chasing.

Andre Russell - Andre Russell looked in ominous form in the recently concluded CPL. He even stroked the fastest 50 of CPL history in just 14 balls. Russell is a match-winner on his day, not just with the bat but with the ball as well. He can be very hard to get away for the batters with all his variations.