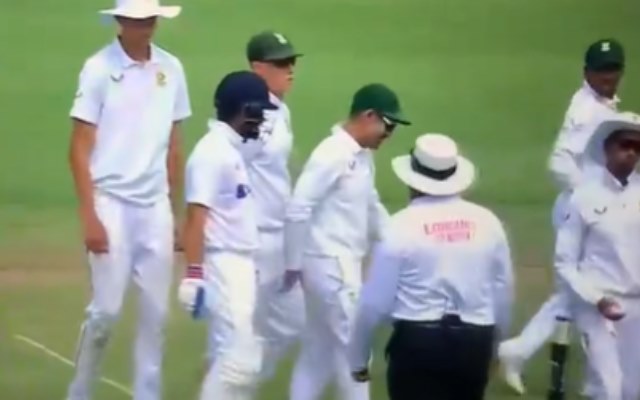 South Africa skipper Dean Elgar has said that Team India were carried away by the DRS controversy that they lost focus on the task at hand in the series-deciding third Test at Newlands, Cape Town which eventually cost them the series.

Senior offie Ravichandran Ashwin had caught Dean Elgar plumb in front of the wicket on Day 3 of the contest as the on-field umpire Marius Erasmus raised his finger instantly. The decision was reviewed and the ball tracker showed that the ball was going above the stumps much to the disbelief of the Indian team and Erasmus. Shortly, Kohli, KL Rahul, and Ashwin were heard lashing out at the broadcaster SuperSport.

It worked out well in our hands: Dean Elgar

"It worked out well in our hands, it played nicely into our hands. For a period of time, they actually forgot about the game and they were challenging a bit more of the emotional side of what Test cricket has to offer", he added.

When asked about the entire saga, the Proteas Test opener mentioned that he loved and also justified his reason on the same.

"Loved it. It was obviously maybe a team that was under a little bit of pressure and things weren't going the way which they obviously were quite used to of late", he said.

Chasing a stiff total of 212 on a difficult surface, Keegan Petersen successfully anchored the innings by scoring 82 before Rassie van der Dussen and vice-captain Temba Bavuma took South Africa across the line;.