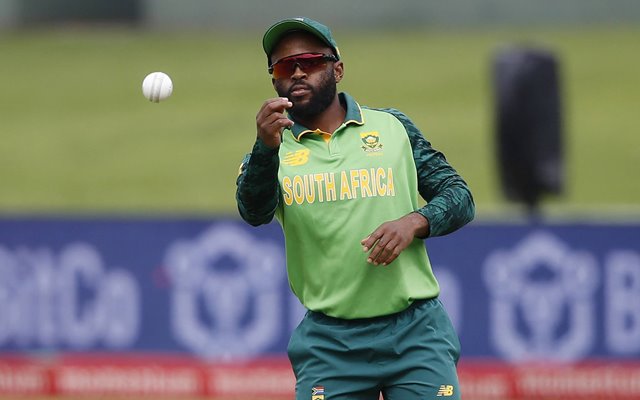 Ahead of the second ODI against Sri Lanka, South Africa have been dealt with a massive blow as their skipper Temba Bavuma has been ruled out of the series due to a fractured thumb. In the absence of Bavuma, spinner Keshav Maharaj will lead the side in the remaining two games. Bavuma fractured his thumb while batting in the first ODI. In the 26th over, Bavuma was hit on the thumb by a throw.

He took medical attention and continued to bat for a while but eventually decided to retire hurt. Bavuma stitched a 106 run stand with Aiden Markram during his 53 ball 38. While the duo was batting, South Africa looked on course to chase the target of 301 but after Bavuma’s departure, the tides turned as Sri Lanka bounced back in the match. South Africa could only score 286 -6 in 50 overs and lost the match by 14 runs. Bavuma was taken for scans in the evening which confirmed the fracture.

“The timelines for return to play will be defined subsequent to that,” the statement said, adding that the national selection panel would meet to identify the T20I captain for the series.

Bavuma’s injury is a massive setback for South Africa who are already without the services of Quinton de Kock who was rested from the series. Despite the loss, there were some positives for South Africa to take. Aiden Markram scored 96 while there were fine performances by Rassie van der Dussen and Henrich Klaasen. South need to win the upcoming game to stay alive in the series.