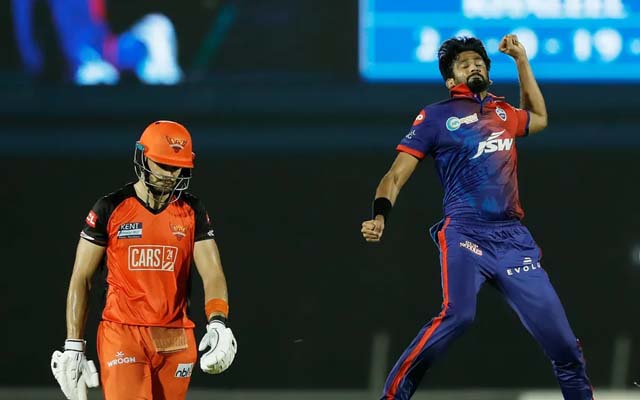 Delhi and Hyderabad locked horns in the 50th game of the ongoing Indian T20 League 2022 at the Brabourne Stadium in Mumbai. The 2016 winners won the toss and elected to bowl first. They had a good start with the ball as Mandeep Singh (0) was caught behind by Nicholas Pooran off Bhuvneshwar Kumar in the first over of the innings.

In the fifth over, Mitchell Marsh (10) was caught and bowled by Sean Abbott, who played his first game of the season. Skipper Rishabh Pant initially struggled as he could only muster four runs in 11 balls. However, Pant took the attack on Shreyas Gopal in the ninth over as the former hit three sixes and four to break the shackles. He looked like scoring big runs but was bowled on the last ball of the same over.

At 85/3, David Warner and Rovman Powell stitched an unbeaten partnership of 121 runs to take the team to a massive total of 207/3. Warner scored 92 off 58 balls including 12 fours and three sixes while Powell scored 67 off 35 balls including three fours and six sixes. Hyderabad bowlers apart from Kumar (4-1-25-1) had another forgettable day. In reply, the Orange Army had a poor start to their innings.

Opener Abhishek Sharma (7) was caught down the leg side at short fine by Kuldeep Yadav off Khaleel Ahmed in the second over. Two overs later, Anrich Nortje took the wicket of opposition skipper Kane Williamson (4), who was caught behind by Pant. Rahul Tripathi, who was going well with 18-ball 22, was caught at deep square leg by Shardul Thakur off Marsh. Aiden Markram (42) and Pooran stitched a partnership of 60 runs before the former was caught at long-off by Yadav off Ahmed.

Two over later, Shashank Singh (10) was caught at short third man by Nortje off Thakur. Pooran scored 62 off 34 balls including two fours and six sixes to give a mighty scare to Delhi, but he got out when the team 43 in 12 balls. The team was restricted to 186/8, losing the game by 21 runs.

160 will happen too and he will get better too. #patience #UmranMalik

While we fret over Virat & Rohit, Kane Williamson is playing at a different level of terribleness #SRHvsDC

Delhi Capitals have been the most up and down team in this tournament. One day, they win by a huge margin and the next day, they lose a game they should be winning. #SRHvsDC

#SRH kindly change the opening for A.Sharma and R.Tripathi is good in opening, Willamson should come on 1st down. Powerplay is more important if you play like test in it then definitely it will be loosing every match

SRH can be a lethal team if they add Samad and Priyam in their playing XI and drop Kane.

SRH can be a lethal team if they add Samad and Priyam in their playing XI and drop Kane.