Natarajan ruled out of IPL 2021 due to a knee injury 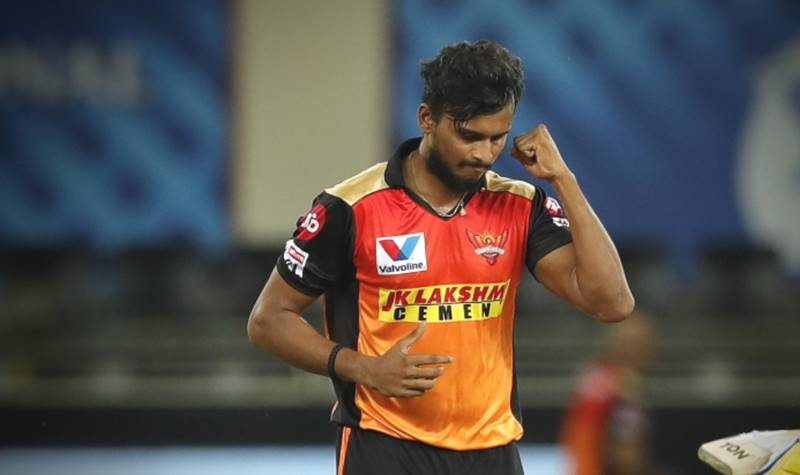 T Natarajan has been ruled of IPL 2021 due to a knee injury. The 30-year-old left-arm pacer did not feature in the last two matches of SRH. He just played two games this season, taking two wickets. The side has won one and lost three. In their last match against Punjab Kings, the Orange Army registered their first win of the season. They won the match by nine wickets.

Although SRH has several Indian seamers in their squad, Natarajan's absence will be a massive blow for the franchise. It also remains to be seen if the knee issue impacts his chances for the upcoming England tour. The NCA physios have been monitoring the pacer's fitness status. They have reported to the BCCI about the escalation of his injury. It is now anticipated that the officials will ask the franchise to release the fast bowler. T Natarajan is still with the SRH squad in Chennai. A few days back, Sunrisers captain David Warner spoke about the pacer after the game against Punjab Kings. However, the skipper did not mention that the Tamil Nadu bowler will have to miss the IPL altogether.

Ishant Sharma has recovered and is available for selection

Meanwhile, there are rumors that another Indian seamer Ishant Sharma, recently escalated the problem on his heel. The tall, lanky pacer missed the IPL games so far because of the injury and not due to non-selection. However, it is known that he has recovered and is available for selection.

T Natarajan is the first Indian bowler to make his debut in all three game formats on the same tour. The 29-year-old had come to Australia as a net bowler. However, his fortunes turned around, and the pacer played all the formats in a single tour. He played his first international match in the ODI series at the Manuka Oval in Canberra. After that, the speedster impressed everyone in the following three-match T20I series.

He successfully turned out the Yorkers with utter authority and came into the limelight during the ongoing series. Natarajan impressed the selectors after his performance for Sunrisers Hyderabad in the 2020 Indian Premier League. The Indian team management then took him in the national squad for the Australian tour. Before the Border Gavaskar series, the Indian team had Jasprit Bumrah, Mohammed Shami, and Umesh Yadav as their three top-notch fast bowlers.