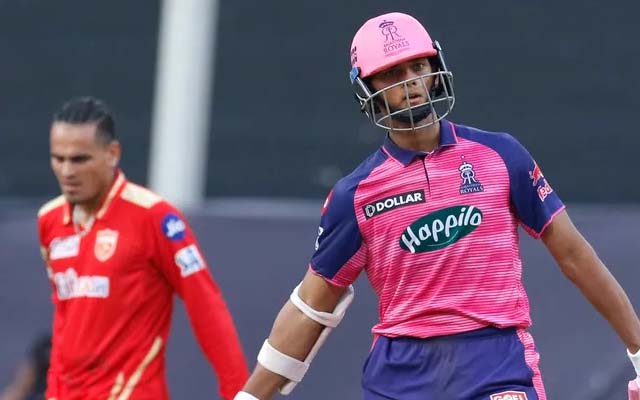 Rajasthan comfortably beat Punjab by six wickets in the 52nd encounter of the Indian T20 League 2022. Yashaswi Jaiswal, in his comeback to the playing XI, set the perfect platform during their chase. Shimron Hetmyer, towards the end, played the perfect finishing role to win the game for the men in pink and blue.

Mayank Agarwal won the toss and decided to bat first in the day game at Wankhede Stadium. Shikhar Dhawan and Jonny Bairstow gave the men in red a good start as they added 47 runs in the partnership. However, Dhawan's early breakthrough (12) got Bhanuka Rajapaksa in the middle. The duo scored some quick runs in their partnership of 42 runs. After Rajapaksa's wicket (27), Bairstow continued his innings, and played some effortless shots. He completed his first half-century of the season.

However, Mayank Agarwal (15) and Bairstow (56) were then dismissed for a team score of 119 in 14.4 overs. Jitesh Sharma and Liam Livingstone then played short but important cameos to get the team to a good total. On the other hand, Liam Livingstone (22) gave away his wicket in a silly fashion. Prasidh Krishna bowled him with a stunning yorker going round the wicket after Livingstone took his guard outside the off stump. Yuzvendra Chahal took three wickets in the game, and Punjab scored 189/5 in the first innings.

Jos Buttler and Yashaswi Jaiswal gave Rajasthan a perfect start. It is to be noted that the 20-year-old was making a comeback to the XI. They did not waste any time chasing a steep total. Buttler (30), however, lost his wicket early on trying to play an unorthodox shot against Kagiso Rabada in the fourth over. Captain Sanju Samson (23) played a few good shots but departed soon. Jaiswal, on the other hand, continued striking the ball with all his power. He scored 68 runs in 41 balls to help Rajasthan reach 141/3 runs in 14.2 overs.

Shimron Hetmyer joined Devdutt Padikkal in the middle, and played some good shots. The equation came down to 39 runs in the last four overs. The duo added 28 runs in the next two overs. They now needed 11 runs in two overs. Arshdeep bowled the 19th over and conceded just three runs. He also took the wicket of Padikkal (31), who was struggling to get going in the innings. Nevertheless, Hetmyer (31) held his nerves in the last over, and won the game for the team.

@PunjabKingsIPL what mayank will do after saving the last over of rishi dhawan really giving a last over to a spinner who didn't take a wicket in his last three over , he think he can defend the 8 run #poorcaptaincy @StarSportsIndia @IPL #pbksvsRR

Arshdeep Singh absolutely sensational stuff.
Bowling in the death when 11 required off 2 overs and you close it with giving way just 3 runs in an over and getting a wicket.
Hats off to Arshdeep.#PBKSvsRR#RRvsPBKS

This man arshdeep singh is performing brilliantly for punjab since last 2 seasons ,bowling with one of the best economy in the death.#pbksvsrr #IPL2022