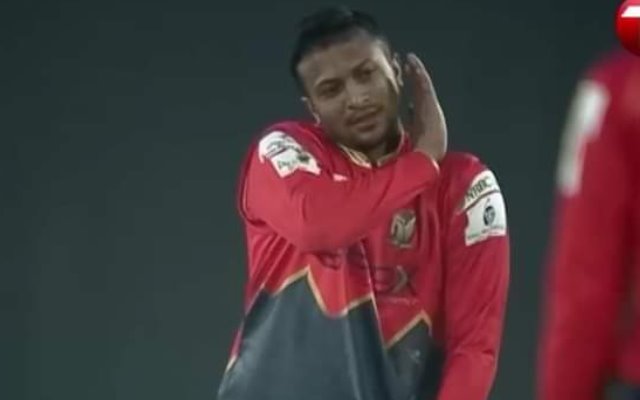 The Allu Arjun starer “Pushpa: The rise” has become a global hit. Its songs and signature steps have become a trend to follow. Cricketers from all over the world are posting their moves on Instagram or celebrating them on the field. Bangladesh all-rounder Shakib Al Hasan is the latest to join.

Shakib was seen celebrating with a swirl across his beard after picking the wicket of Faf du Plessis in the ongoing Bangladesh Premier League. The trend has become very popular in the BPL. Shakib became the third player after Nazmul Islam and DJ Bravo to celebrate in this manner.

After Nazmul Islam, then @DJBravo47, and now the Bangladeshi 🐐 @Sah75official displaying the #Pushpa move! 🥳

The @alluarjun movie has really taken over the #BBPL2022. 🔥

The Pushpa trend is from Allu Arjun’s recent blockbuster. The song ‘Srivalli’ and its signature step has become very popular on social media. People have put on their creative hats and are all over the place with their moves. David Warner, Hardik Pandya, and Suresh Raina are among some other cricketers who have taken on this challenge.

In the match between Fortune Barishal and Comilla Victorians, Shakib picked up 2 wickets for 25 runs in his spell. They restricted Victorians for 158/7 in 20 overs. Barishal, in return, got off to a rough start by losing opener Shykat Ali and skipper Shakib early. Except for Najmul Hossain Shanto (36), no other batters could show any resistance as they all fell for 95 in 18 overs. Victorians won the match by a huge gap of 63 runs.

Nahidul Islam was the player of the match as he finished with the figures of 5 for 3 in his spell of four overs. He outplayed the Barishals and concede just 1.25 runs per over.