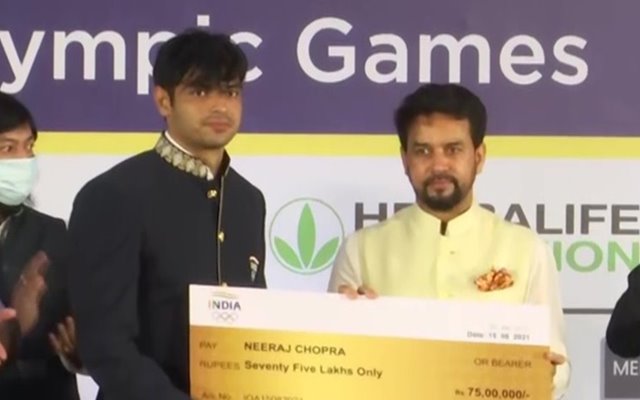 Neeraj Chopra won the gold medal in the Javelin Throw event on the final day of the Tokyo Olympics. This was the first gold for an Indian contingent in the Olympics after Abhinav Bindra's gold during the 2008 Beijing Olympics. Meanwhile, Thakur posted a congratulatory Tweet for all the recipients on his official handle. This is where he tagged another Neeraj Chopra. The official Twitter ID of the Javelin thrower is @Neeraj_Chopra1.

"I am elated that Nine persons from the Sports fraternity, including @Devjhajhariya and @NeerajChopra, have been awarded #PadmaAwards this year. My hearty congratulations to each one of them. Their contributions will definitely inspire others, particularly the budding sportspersons," the 47-year-old posted.

My hearty congratulations to each one of them.Their contributions will definitely inspire others, particularly the budding sportspersons.

Neeraj also took to Twitter and said that he is humbled and honoured to be a recipient of the award. He added that he will continue to keep working hard for the nation.

Humbled and honoured to know that I have been named as a recipient of the Padma Shri award and the Param Vishisht Seva Medal. I thank you all for your good wishes and blessings and will continue to work hard to do my best for the nation.