The absence of overseas players will not stop us from completing the remaining matches: Rajeev Shukla 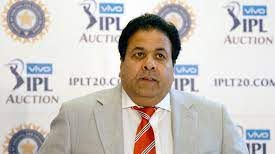 Rajeev Shukla has stated that the unavailability of foreign players will not stop the board from hosting the remaining IPL matches. The Indian cricket board had recently announced that the UAE would host the rest of IPL 2021. However, the tournament got suspended on May 4 due to the Covid-19 crisis in India. Therefore, the remaining 31 games are likely to be held from September 15 to October 10 in the UAE. This means the Indian cricket board will have less than a month to wrap up the 14th IPL season. This also includes quarantine requirements and bio-bubble restrictions. Notwithstanding, few of the cricket boards aim to keep their players afresh for T20 World Cup in October. Thus, certain IPL franchises might miss some of their overseas players' services.

BCCI has no problems playing behind closed doors: Rajeev Shukla

Rajeev Shukla confirmed that other BCCI officials, including president Sourav Ganguly and secretary Jay Shah, would soon reach UAE. Furthermore, Rajeev Shukla stated that BCCI was in talks with the Emirates Cricket Board (ECB) and the UAE government over spectators' entry into the stadiums. Shukla mentioned that they were ready to follow the instructions strictly and had no problems with closed-door games. Rajeev Shukla also explained why England was not considered as an option to shift the remaining games of the 14th edition.

BCCI is currently following the wait-and-watch policy before deciding on the upcoming T20 World Cup. The mega event of the year is scheduled to be held in India from October this year. However, the BCCI is likely to seek time from ICC during the board meeting. Rajeev Shukla has announced that India will be the first choice. However, if the Covid situation doesn't improve in the country by July first week, then the event will be shifted to the UAE. It is noteworthy that the tournament was held without any problems back in 2020 in the UAE.

As of now, several questions are raising over the support of players from England and Australia. Team England is scheduled to play two T20Is in Pakistan on October 14 and 15. On the other hand, Cricket Australia might need to deal with their players' responsibility for the forthcoming World Cup and Ashes toward the year's end.