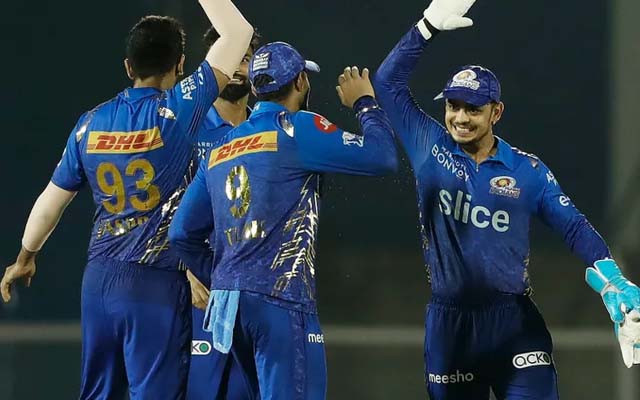 Mumbai beat Gujarat by five runs in a last-ball thriller in the 51st match of the Indian T20 League 2022. Chasing a modest target of 178, Hardik Pandya's men got off to a flying start, laying the groundwork for their chase. However, a thrilling last over by Daniel Sams won Mumbai their second game of the season.

Gujarat won the toss at the Brabourne Stadium and asked Mumbai to bat first. Rohit Sharma and Ishan Kishan had the best start for the men in blue and gold of this season. Sharma played with complete freedom and hit some clean strokes. Kishan was giving him support, but played a few false shots early on. The duo added 63 runs in the powerplay, which is the highest for them this season. Shortly after that, the trouble began for Mumbai.

They lost a few wickets in the middle overs, which put a lot of pressure on them. Sharma (43), Suryakumar Yadav (13), and Ishan Kishan (45) were dismissed within 12 overs for a team score of 111. Kieron Pollard and Tilak Varma held on for a while but a brilliant move by Hardik Pandya dismissed Pollard (four) in the 15th over. He held back Rashid Khan which troubled Pollard. He bowled him with a leg break after setting him up with googlies.

After losing a couple of more wickets, Tim David played the perfect cameo of 44 runs in 21 balls. This helped Mumbai reach 177/6 in the first innings. During the chase, Wriddhiman Saha gave Gujarat a flying start but Shubman Gill struggled to get a quick start. However, he settled in after a while and the duo did the bulk of the work. They kept scoring runs at a good pace as both reached half-centuries. Murugan Ashwin removed the pair in the 13th over. Saha (55) and Gill (52) scored 106 runs in the partnership.

Mumbai needed 67 runs to win in the last eight overs. With a few runs scored and few wicket down, the equation was reduced to 40 runs in the final four overs. Gujarat scored 20 runs in the next two overs but lost their skipper Hardik Pandya (24). David Miller and Rahul Tewatia held their nerves to score 11 runs in the 19th over. With nine needed of last over, Gujarat were in complete control. However, Daniel Sams held his nerves and bowled a brilliant over, handing Mumbai a win by 5 runs.

A great final over by Sams gives #MI the win. 💔#GTvMI | #TATAIPL

Smallest margin of win for MI by runs:

- Hardik Pandya sums up our performance in #GTvMI tonight.

This is #MI which is known to world

Defending total any day & hittu does in style

What a fantastic last over!