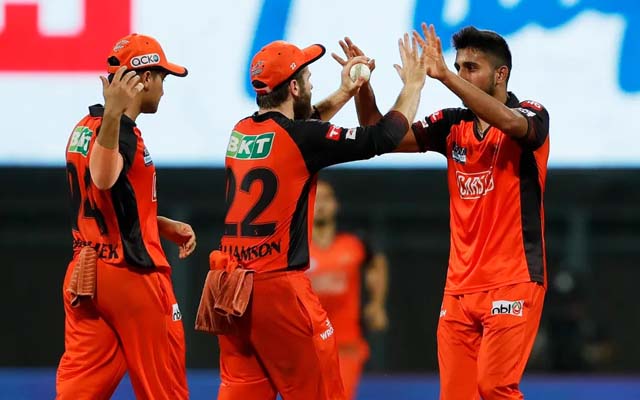 Hyderabad beat Mumbai by three runs in a last-over thriller to keep their playoff hopes alive. Despite a strong start by Mumbai and a late scare from Tim David, Hyderabad was able to defend their score of 193 runs. With the win, the orange army broke their five match losing streak/

Mumbai won the toss and decided to bowl first at the Wankhede Stadium. Hyderabad lost an early wicket, but got off to a great start. Rahul Tripathi and Priyam Garg, who was playing his first game of the season, formed a solid partnership. They helped Hyderabad reach 57 runs in the powerplay. The pair proceeded to perform admirably, scoring 78 runs together. In the 10th over, Ramandeep Singh ended the partnership by dismissing Garg (42) for a team score of 96.

Pooran then joined Tripathi in the middle and both continued to keep the run rate high. Tripathi (76) had complete control of the game as he raced to his half-century. Pooran (38) also was attacking the bowlers. They added 76 runs in the partnership until the 17th over. However, a few quick wickets reduced the scoring rate in the end. Hyderabad finished with a total of 193/6. Ramandeep ended with the figures of 20/3 in three overs for Mumbai.

Rohit Sharma and Ishan Kishan had a great start to their chase. Sharma (48) was striking the ball cleanly, while Kishan (43) played a few false shots initially but kept the runs flowing. They added 51 runs in the powerplay to give the required start. They added 95 runs in the opening partnership. Both lost wickets quickly while attempting to boost the run rate for a team total of 101 in 11.3 overs.

After that, Mumbai lost three more quick wickets to reduce Mumbai to 144-5 in the 17th over, leaving Mumbai 50 runs in 20 balls. Tim David (46 off 18), however, played a blinder and brought Mumbai close. He hit 26 runs in the 18th over but lost the wicket on the last ball. Bhuvneshwar Kumar delivered a brilliant maiden 19th over and grabbed one wicket. In the last over, Mumbai required 19 runs. Fazalhaq Farooqi kept his cool to prevent Mumbai from achieving the target.

@mipaltan has lost its shame and taken losing as a habit

Hyderabad won the match but @mipaltan already won the next IPL through @timdavid8‘s magic.

What a knock that was!

That run out of David made it clear that it was MI who defeated MI. Tim David was looking all set to take them through

Bhuvi bowled an outstanding death over to bring SRH back (19th Over Maiden) pic.twitter.com/OGxZxyuvHy

WE WON!!! @SunRisers still alive in the tournament 🤸‍♀️🤸‍♀️ #MIvsSRH