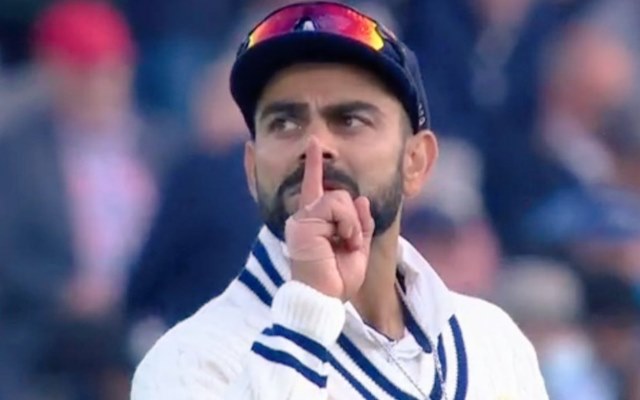 Former England skipper Nasser Hussain has lauded Virat Kohli for inducing fearlessness and aggression in team India. Indian teams from the past were known to be moderate but this team under Virat Kohli is different. The team doesn’t mind getting under the skin of their opposition.

They thrive on such situations and come out on top on most occasions. During the second Test at Lords, Indians were all over England after the hosts tried to push back Jasprit Bumrah while batting. At the end of the match, KL Rahul said if the opposition tries to have a go at one of their players, the team will hunt them down as a pack. The statement is a statement in itself and shows the confident mindset of the team.

“Virat Kohli is the right man at the right time to lead this formidable India side. His players, in particular the bowlers, want an aggressive captain. They want Kohli stirring things up, as he did so effectively in that brilliant second Test at Lord’s,” he wrote.

“Jasprit Bumrah has always seemed, to me a quiet and reserved character off the field, but look at the way he attacked and went after Jimmy Anderson on that third evening.”

Nasser Hussain further revealed that former India coach Duncan Fletcher told him that Virat Kohli does not want to settle for anything other than a win. The 53-year-old said Virat’s hunger to win reflects in everything he does, citing the example of his competitiveness during friendly football games.

“I remember speaking to Duncan Fletcher about Kohli when he was India coach and he just told me he was a winner. At almost any cost, too.”

“You just have to watch him playing football with his team before play to see how competitive their captain gets. He doesn’t mind sliding in with the odd wild tackle, that’s for sure. He is so driven. Nothing sums that up better than the sight of Kohli in a white-ball run-chase because he sees the end goal and he won’t let any bowler get in his way.

The third Test between India and England will get underway on August 25 at Headingley.