Watch: Babar Azam’s one handed stunner will leave you awestruck 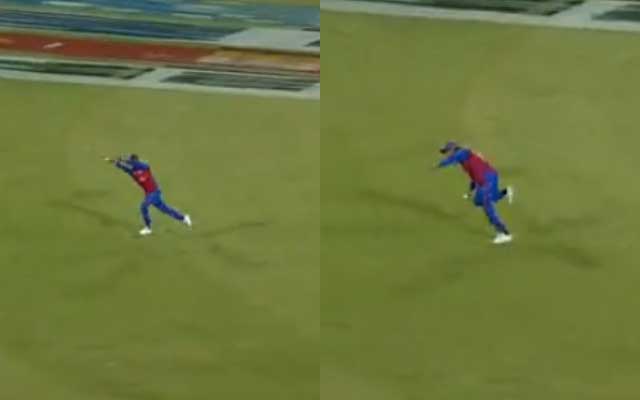 Karachi Kings skipper Babar Azam took a spectacular catch against Islamabad United, leaving fans awestruck. In the Karachi leg of the ongoing PSL, teams are bashing bowlers relentlessly. The highest total for a team is 229 and except for Kings, every other team has managed to chase down a target between 170-190. Bowlers are having a difficult time with small boundaries. In these playing conditions, bowlers get help if fielders put in some extra effort.

One such effort was put in by Pakistan and Kings skipper Azam. In the Match 14 of the tournament, he took a blinder to dismiss Asif Ali.  Ali played a lofted shot over covers against Usman Shinwari on the first ball of the 18th over. Ali didn’t time the ball but it looked like the ball would go over the fielder. However, the 27-year-old ran back and took a one handed stunner.

In reply, the Babar Azam-led side lost nine wickets for 110 runs runs. They accumulated 135/9 at the end of the game, with Nabi (47*) and Sahibzada Farhan (25) scoring substantially. Fifth highest run-getter of the tournament, Babar Azam was dismissed for eight. His opposite number Shadab Khan took four wickets while, Waqas Maqsood, Mohammad Wasim, and Hasan Ali took one each.

With this loss, Kings are tottering at the last position in the points table with five losses in as many games.