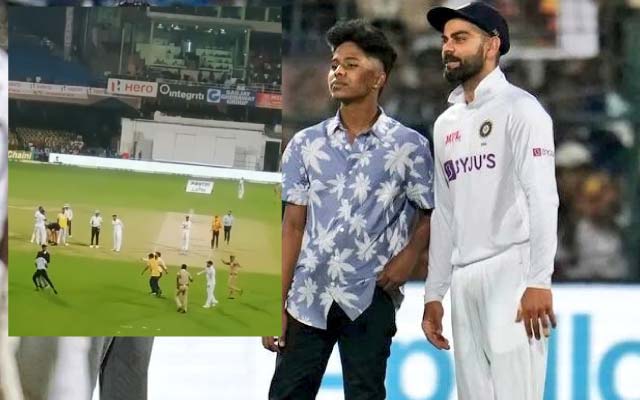 Virat Kohli marked his return to the M. Chinnaswamy stadium in Bangalore after many years. Playing for the Bangalore team for several years, Virat Kohli has developed a special bond with the city. He has always been very loyal to the team, and the team fans to him.

It was a no brainer that Virat’s return to his home away from home will be a grand celebration. He was welcomed with huge cheer when he stepped out to bat. However, some fans are willing to do more to get a glimpse of their superstar.  On Day 2, a few fans breached the security and entered the stadium to click a selfie with Virat Kohli.

It all happened in the sixth over of Sri Lanka’s second innings when the game was stopped because of an injury to Kusal Mendis, who was hit by a delivery by Mohammed Shami. The fans saw it as an opportunity to see their idol up close and penetrated the security.

Here are the videos:

Virat Kohli is one of the most popular players in Indian cricket and has a huge fan following across the globe. This is not the first time that an intrusion has occurred for Virat Kohli. More recently, a similar incident took place in the first match of the series played in Mohali. The concerning part though is that during these COVID-19 times, fans getting too close to the players can increase the risk of an outbreak.

In the meantime, the pink-ball Test in Bangalore has been dominated by India. India needs nine wickets to win the match, while Sri Lanka needs 419 runs to win. Rishabh Pant, Shreyas Iyer, and Jasprit Bumrah have been the players that have guided India to a comfortable position in the match.