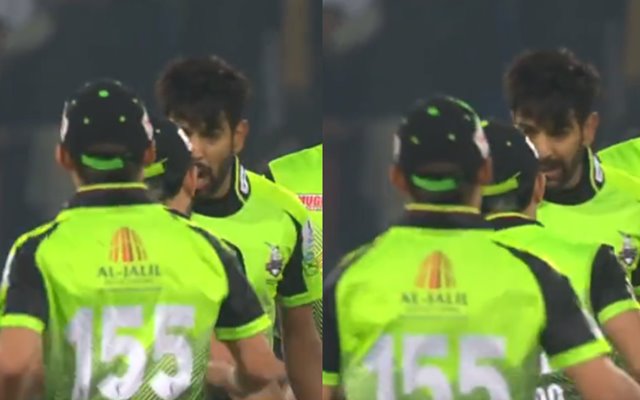 Haris Rauf slapped his teammate Kamran Ghulam during a PSL 7 match between Lahore Qalandars and Peshawar Zalmi. This happened after Rauf took a wicket after Ghulam dropped a catch off his bowling.

Ghulam had dropped Hazratullah Zazai’s catch off Rauf in the same over. He was visibly irritated by this. Ghulam, on the other hand, was smiling when he was attacked by Rauf.

The PCB has taken no action concerning the Rauf-Ghulam affair. The PCB has been the subject of a huge debate, which was sparked by James Faulkner. The Australian withdrew from the competition in the middle, citing payment issues and misbehaviour. The PCB, however, dismissed any such allegations and barred the all-rounder from participating in the Pakistan Super League.

Meanwhile, the Lahore-Peshawar match ended up being a quite fascinating one. Both sides scored 158 runs, with skipper Sheen Afridi scoring 23 runs in the second innings’ last over to force the match in Super Over. Wahab Riaz bowled the Super Over and gave up only five runs in the over, with no boundaries. Shoaib Malik then finished the game with successive boundaries off the bowling of Shaheen Afridi. Lahore, on the other hand, managed to hold on to second place and will now play Multan Sultans for a place in the final.