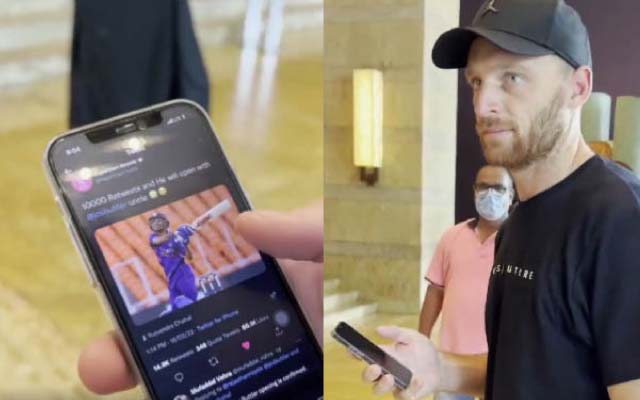 One of the upsides of having Yuzvendra Chahal on the team is full entertainment. Rajasthan have found themselves in all the comic events ever since the leg-spinner joined the team ahead of the 2022 season.

One of the first things that Chahal did after getting into the team was that he hacked Rajasthan’s Twitter account and announced himself as the team’s captain. This took everyone on a laughter riot. He had many wicked things planned as he posted a lot of tweets and sent direct messages to his teammates.

One of the tweets that gained a lot of attention was him opening with Jos Buttler. “10000 Retweets and He will open with @josbuttler uncle,” he wrote in the tweet from Rajasthan’s Twitter account

Jos Buttler, who has reached the Rajasthan team hotel, had the perfect reaction to this tweet. Jos Buttler seemed frustrated after seeing the Tweet.

Meanwhile, the Indian T20 League is set to begin on the 26th of March with Chennai and Kolkata playing the season opener. Rajasthan will open their campaign against Hyderabad on the 29th of March. Sanju Samson will continue to lead the side in this season. Notably, the Rajasthan team has not won the ITL since the inaugural season. They look a strong team this time and will be keen to end their trophy drought.