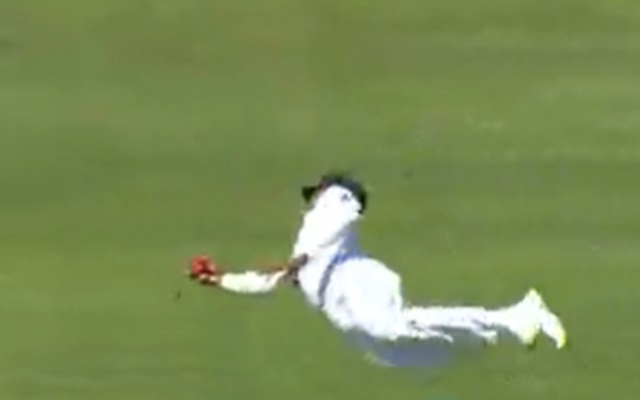 The ongoing third Test between South Africa and India is turning out to be a memorable one for Keegan Petersen. After a brilliant 72 with the bat in the second innings, the batter produced an absolute ripper on the field during the third innings of the third Test

In just the second ball of day three, Petersen held on to a really tough chance off the bowling of Marco Jansen.  The Proteas pacer bowled a short-pitch delivery into Cheteshwar Pujara's body, leaving India's number three batter in a dilemma whether to play the ball or not. Thus, he ended up playing it towards the leg gully region.

The ball seemed to be falling between the keeper and the fielder at leg gully, but an acrobatic effort by Petersen ensured that the opportunity of picking a wicket wasn't lost. He made a full-length dive towards his right and grabbed the ball with one hand.

This inhuman effort managed to stun one and all. Even the Indian Test captain Virat Kohli, who was at the non-striker's end, was absolutely shocked. On most days, this was would have evaded the fielders but Petersen ensured that there weren't any mistakes on his end. This led to the hosts having a brilliant start to the day.

In a matter of a few more balls, Ajinkya Rahane was dismissed for one as well. He edged one to the first slip. Thus, the Kohli-led side lost two quick wickets and things started to look difficult for them. However, the captain and wicket-keeper batter Rishabh Pant batted well post that.

They ensured that there were no more hiccups in the first session of day three. In fact, the keeper-batter got to his half-century as well. Post Kohli's departure, the Indian batting collapsed, with Pant playing a gem at other end. The southpaw scored his fourth Test century but India were bowled out for a mere 198. South Africa now need 212 to win the Test and series.