Watch: Pakistan Player Gets Hospitalised After His Teammate’s Shot Hits Him On Head During Practice 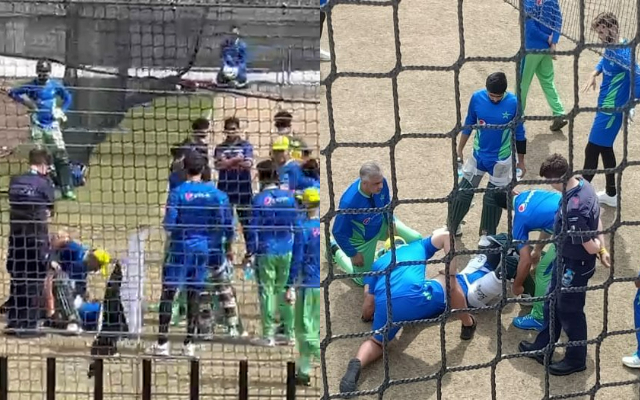 Both India and Pakistan will open their 20-20 World Cup campaign on 23 October 2022 in Melbourne. After losing against the arch-rivals in the last edition of the World Cup, India will look to do well this time around. However, both teams have been preparing for the mega clash. But, Shan Masood made headlines after getting into the team before the World Cup in the England T20I series.

However, before the World Cup, Fakhar Zaman got injured. So, selectors considered Shan Masood in place of Zaman. But, ahead of the India clash, the batter got hospitalized after getting involved in an unwanted incident.

Shan Masood leaves with ice pack on his face, Nawaz hit a shot & the ball struck Masood. Shan was to play in place of Fakhar Zaman against India. This could be a problem for Pakistan #SportsYaari pic.twitter.com/XK0m180OKL

Speaking of the video, Shan Massod was seen having an ice pack on his face. Speaking of the incident, his teammate Mohammad Nawaz hit a shot & the ball struck Masood’s head during the net session. However, he has been taken to a hospital for a further check-up and his availability will be decided once he came back from the hospital.

The left-hander was lying down on the ground for 5-7 minutes after being hit. Speaking about his recent form, Shan Masood was a part of Pakistan’s T20I tri-series triumph in New Zealand. But, he did not have a great series with the bat. Masood only scored 64 runs in four innings, at an average of 16. Still, he could be a vital part of the Men in Green in the World Cup.

Meanwhile, if he, unfortunately, misses the India match, Fakhar Zaman will have game time in the final playing XI. Speaking about the recent warm-up matches, Pakistan tasted a defeat against England. Shan Masood looked good in that match as he scored 39 runs off 22 balls, including seven fours. He scored runs at a strike rate of 177.27. On the other hand, India won their warm-up match against Australia in Brisbane. As the next warm-up match got canceled for both the teams due to rain, both will be in action again on 23 October while facing each other.