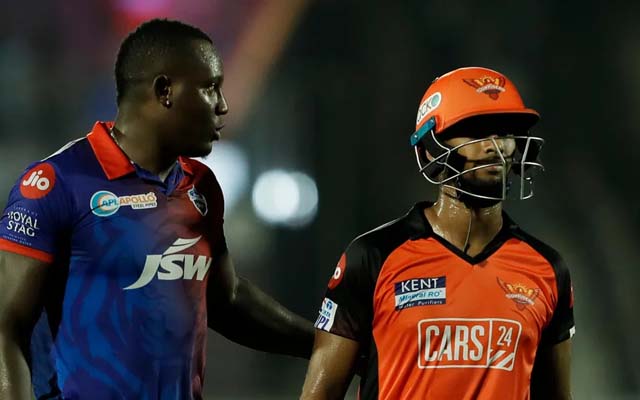 Delhi and Hyderabad played each other in the 50th game of the Indian T20 League 2022 at the Brabourne Stadium in Mumbai. The Orange Army won the toss and elected to bowl first. While Delhi scored a few quick runs, they kept on losing wickets as well. Bhuvneshwar Kumar, Sean Abbott, and Shreyas Gopal took the wickets of Mandeep Singh, Mitchell Marsh, and Rishabh Pant respectively to reduce Delhi to 85/3 in nine overs.

At this stage, the likes of David Warner and Rovman Powell took the matter into their own hands. They stitched an unbeaten partnership of 121 runs. Warner remained unbeaten on 92 as his batting partner took the attack on the opposition bowling in the end overs. This denied the Aussie the fifth hundred of his Indian T20 League career.

On the other hand, the Caribbean player hit an unbeaten 67, and the pair took the team to 207/3. For Hyderabad, only Bhuvneshwar Kumar was effective. Other bowlers such as Sean Abbott, Umran Malik, Kartik Tyagi, Shreyas Gopal, and Aiden Markram traveled the journey. In reply, the 2016 winners lost their openers, Abhishek Sharma and Kane Williamson within the first five overs, with the score reading 24/2.

Rahul Tripathi (22) tried to up the ante but was dismissed at the end of seven overs. Aiden Markram scored a 25-ball 42 with an astonishing strike rate before he was dismissed by Khaleel Ahmed in the 13th over. Nicholas Pooran played a blinder of 62 off 34 and kept Hyderabad in the hunt. However, he was caught at long-on by Powell off Shardul Thakur when the team need 43 runs off just 13 balls.

The team ended up losing the game by 21 runs as they were restricted to 186/8.  The Kane Williamson-led side now has five win in 10 games and need to win at least three out of four remaining games to keep their qualification hopes alive.

Umran Bowling at speed of 157 kmph still get boundries #SRHvDC

Warner isn't the only one a mission tonight pic.twitter.com/3m01nKUEv6

*Fastest Delivery of the Match is announced in post match presentation*

This is the 'come at me' energy @davidwarner31 came out to bat with tonight. #DCvSRH #IPL2022 pic.twitter.com/cmyvrhvf6M