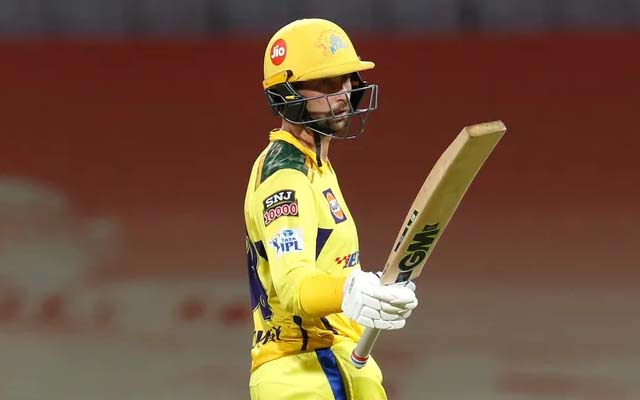 In the game between Delhi and Chennai, Devon Conway played a huge role as he scored his third consecutive half-century in the season. The men in yellow were asked to bat first by Rishabh Pant after winning the toss. The opening pair of Conway and Ruturaj Gaikwad gave the team a perfect start.

The New Zealander was hitting the ball all over the field, with Gaikwad providing excellent support. Conway raced to his half-century, but Gaikwad (41) could not hold on for long. He was dismissed in the 11th over by Anrich Nortje. The duo added a partnership of 110 runs. After his dismissal, Conway slowed down a bit.

He scored 87 runs in 49 balls, with seven fours and five sixes in the innings. He was dismissed by Khaleel Ahmed in the 17th over by a short ball that took the edge of his bat and went to Rishabh Pant's gloves behind the stumps.

Twitter was elated with his consistent performance this season. Fans were happy with him scoring consecutive half-centuries. "Brilliant batting & consistency by #devonconway! This was expected and he lives up to it," wrote a fan.

Here are the top tweets

Would be the Best Foreign Retention for #CSK in upcoming seasons.

Brilliant batting & consistency by #devonconway! This was expected and he lives up-to it. #CSKvDC @ChennaiIPL

A reminder for those who awe at Jos Buttler,

You had never seen Devon Conway bat, all games.