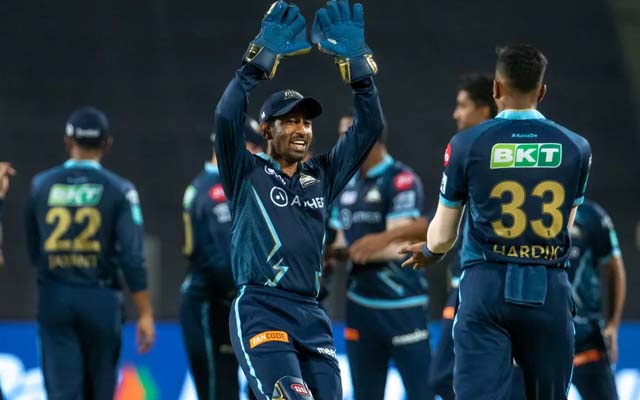 Indian T20 League debutants, Lucknow and Gujarat played each other at the Maharashtra Cricket Association Stadium in Pune. Winning the toss, the Hardik Pandya-led side won the toss and batted first. They started slowly as in-form Wriddhiman Saha (five off 11) struggled to put the bat on the ball. Matthew Wade, who played after warming the bench didn't have a comeback he would have liked for as he could only score 10.

Skipper Hardik Pandya and in-form David Miller didn't look like themselves and struggled with the willow. Shubman Gill scored an unbeaten 63 which proved effective for the team on a wicket where the pacers were getting extra bounce. Gill enjoyed the batting on this surface as he likes to play square of the wicket. On the other hand, the designated finisher of the team, Rahul Tewatia scored an unbeaten 22 off 15 balls.

The duo's efforts took the team to 144/8, a total that looked like a fighting total considering the kind of pitch the teams were playing. For the Men In Mint Green, Avesh Khan took two wickets while Mohsin Khan and Jason Holder took one each. In reply, the KL Rahul-led side has no answer to the relentless bowling from the Men In Navy Blue. Apart from KL Rahul, Quinton de Kock, and Avesh Khan could cross the double-digit mark.

Talking about the Ahmedabad-based team's bowling, Rashid Khan took four wickets on a wicket that was helping pacers. Apart from him, Mohammed Shami took an all-important wicket of Rahul and gave away only five runs in three overs. Left-arm pacer Yash Dayal took two and debutant R Sai Kishore took as many wickets. Lucknow was expected to chase down the total but their opponents showed why they were on the top of the points table.

Notably, ahead of the tournament, none of the experts put them in contention for the playoffs citing their weak batting. However, after playing 12 games, they have managed to officially qualify for the playoffs.

When you're having a good day and suddenly think about how one man stood between us beating the table toppers. pic.twitter.com/yd3QKQmsOJ